Luke and his wife, Jerusha, left the old farm in Pavilion, New York for Comstock, Michigan on January 25, 1848 (although the ledger was printed for the year 1847) and he kept a ledger of expenses during the trip. They arrived at his father’s farm on February 26. Their goods arrived on April 20 and they moved to their own farm on May 24. On September 14 they moved into their new house. Jerusha died at 7:10 a.m. on September 23.

According to entries in later diaries, he “landed” in Comstock in 1837. It is believed that at some point after his first wife, Minerva Payson, died he returned to New York and married Jerusha Crittenden. Then in 1848 they made this move to Michigan.

The following receipt is dated January 25, 1848, the same date that Luke and Jerusha left New York for Michigan, and lists the items that they received from the estate of Jerusha’s father, Jairus Crittenden. Jairus died June 22, 1843; however, it probably wasn’t until after the death of his wife, Eunice (Sprague) Crittenden on July 1, 1847, that their possessions were divided among their descendants.

The receipt reads as follows: 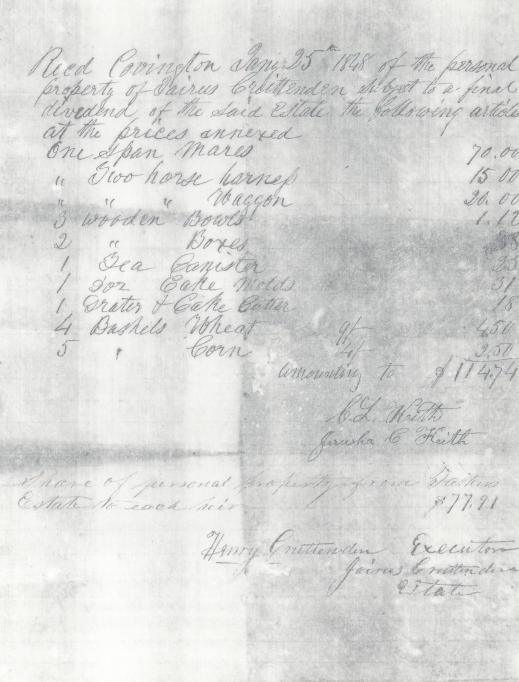 This map shows the route they took, and some of the stops they made, during the trip.

This seems to be more of a notebook with directions for something he was building, a ledger of expenses and dates when he played his violin at various functions.

The next page has the names L. Payson and Luke Keith and amounts but it is hard to tell which amounts belong to Payson and which to Keith, but total up to $10.32.

See My Other Blogs

Letters & Diary Entries from 1819-1859 at: https://oldfamilyletters.wordpress.com/

Letters & Diary Entries from the 1860s at: https://lettersfromthe1860s.wordpress.com/